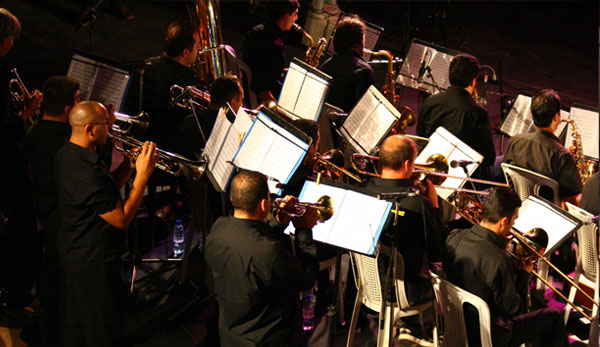 The Syrian Jazz Orchestra was founded six years ago by a group of eminent Syrian musicians in cooperation with international musicians from Switzerland, USA, Netherlands, Greece, and Germany, forming the first regular and complete Arabic Big Band in the Arab world.

The Syrian Jazz Orchestra began by mastering and performing classical standards from the international jazz repertoire. Before long it began to establish its own identity as a Syrian, Arabic and oriental jazz orchestra, creating its own arrangements and compositions, and constantly experimenting with new ways of relating jazz music to diverse musical styles and heritage. The resulting unique repertoire quickly become the Syrian Jazz Orchestra’s hallmark style: a solid jazz music foundation that can absorb, adopt and carry other music genres and styles (world music, contemporary and classical western music, Arabic and Syrian traditional music, and others) without affecting their essence. As an orchestra, its base remains its dedication to performance of classical, contemporary and innovative jazz music.

The successful establishment of the Syrian Jazz Orchestra has increased the interest in jazz music among Syrian musicians and brought jazz music closer to the Syrian audience. It has also proved to be a real incubator for Syrian jazz and musical talents, creating work opportunities, giving exposure to local musicians and providing them an opportunity affirm their own styles. Famous Syrian singer Lena Chamamyan, as well as other Syrian jazz bands and soloists, have launched successful careers from the seeds that sprouted from their work with the Syrian Jazz Orchestra.

The Syrian Jazz Orchestra achieved its highest recognition when, for two years running, it joined with the Syrian National Orchestra and the Choir of the National Conservatory to celebrate two major, ambitious and successful musical projects: Farah Sourya Festival in Damascus and Aleppo in 2007; and the April 17th special event organized by Damascus Arab Capital of Culture in 2008.

The Orchestra has notably participated in many other events in Syria, including a major concert in Bosra Stadium in 2005, and the Jazz Lives in Syria Festival from 2005 to 2009.


Moreover, the Syrian Jazz Orchestra has admirably represented Syria in music festivals abroad: in 2008 at the Morgenland Festival in Osnabruck, Germany, one of Europe’s most prestigious events dedicated to music from the Middle East, and also in a concert in Oldenbourg. In 2009 at the Morgenland Festival, in collaboration with the well known NDR Big Band (North German Radio Big Band). In 2010, the Syrian Jazz Orchestra program is quite intensive outside Syria: the Morgenland Festival in August; a concert in Amsterdam, Netherlands in September; the Salam Orient Festival in Vienna and Graz, Austria in October; also members of the orchestra will participate in international workshops in June in Frankfurt.

Other projects are in preparation for 2011 in Switzerland and in France.

In 2010 the Syrian Jazz Orchestra will launch its first CD in a major concert in Damascus. This major musical project will be the culmination of years of hard work and creativity by some of Syria’s best musical talents, and the fruit of innovative collaboration with international musicians. During this concert a catalogue detailing the band’s history, works and members will be presented parallel to a DVD documenting its work and concerts during the six last years.

The Syrian Jazz Orchestra has a standard Big Band combination (4 trombones, 4 trumpets, 4 saxophones, 1 tuba or baritone, drums, guitar, bass, piano). It enjoys a flexible format that makes it possible to invite international soloists and other instruments not usually found in a jazz orchestra, such as oud, qanun and nai.
Its solid foundation has allowed the Syrian Jazz Orchestra to be considered as the first complete Big Band in the Arab world. This format makes it possible to easily adapt to the collaborative needs of other major orchestras (e.g. the collaboration with the Syrian National Orchestra and NDR Big Band), and also provides the platform for international jazz musicians to be part of the Syrian Jazz Orchestra and to perform its concerts with very limited rehearsals.

While jazz music has become increasingly popular among Syrian musicians and audiences, the lack of training institutions constituted a major obstacle to the creation of top level jazz in Syria. However, with the establishment of the Syrian Jazz Orchestra, international experts and musicians such as Amadis Dunkel (Switzerland), who served as the Orchestra’s first trainer and conductor; pianist and composer Frank Carlberg (Finland/USA), who composed for the Orchestra and conducted it; solo saxophonist Daniel Blanc (Switzerland); Georgious Antoniou(Greece/Switzerland); Joost Kesselaar (the Netherlands); Gerard Klign (the Netherlands), were invited to perform with the Orchestra, to conduct academic workshops, and to provide hands-on training for all jazz musicians in Syria.

To further enhance capacity building, all jazz musicians in Syria were invited to perform with the Syrian Jazz Orchestra to enrich their jazz experience and to take it to higher levels.

The Syrian Jazz Orchestra is now a well trained jazz ensemble with considerable international experience, and consequently is able to work successfully with any established international conductor.

The capacity building plan for 2010 is envisioned as follows:

- Joint project with conductor Wolfgang Deifenbach from Germany in conjunction with the Goethe Institute. The orchestra will rehearse a totally new repertoire and perform a concert at the end of the workshop in 29th April.
- Joint concert with Syrian Brass Band in 17th April for Independence Day.
- During the year Syrian Jazz Orchestra will perform regularly concerts at Syrian festivals and especially in a “Music on the Road” project.
- The Syrian Jazz Orchestra will be the highlight of the Syria Jazz Festival the first week of July. There will a one week workshop with more than ten international musicians from seven countries.
- Joint project with 50-member German choir, performing the compositions of renowned Swedish composer Nils Lindsberg. One concert in mid-August at the Morgenland Festival and then in Damascus, Amman, and Bosra in September.

Outside Syria:
- June. Members from the Syrian Jazz Orchestra will join a jazz project in Bad Arolsen, Germany (Youth Festival), participating in a four day festival along with jazz big bands from around the world and musicians from Russia, Poland, Finland, Germany, Norway and other countries.
- August. Co-production in Osnabruck, Germany with the well established NDR Big Band.
- September. Joint project with Class Ensemble in Amsterdam, Netherlands.
- October. Joint project with the Graz, Austria University Big Band. Two concerts at the Salam Orient Festival in Vienna and Graz.

2011:
- February. Joint project with a Swiss Jazz Orchestra from Geneva.


These joint projects with reputable European bands and musicians will take place along with workshops in these countries, which will contribute to enhancing the Syrian Jazz Orchestra experience, improving its performance and raising Syrian jazz to the level of well-established and worldwide-acclaimed contemporary music practices.

The Syrian Jazz Orchestra has an essential grounding in classical jazz, yet its hallmark activities aim toward the creation of a newer and richer jazz repertoire based on Syrian and oriental musical forms, and the presentation of traditional oriental favorites in new settings:

As a modern jazz composer, Frank Carlberg has created arrangements that combine Maqam with modern jazz such as (Asparagus), (Drowsy, with text by Tagore), (Land of Art) and (This is the Gallous).

is a project aiming at making Syrian music alive in the media through a professional website and an online social media network that can reach wide international audiences and professional music makers.

Join our newsletter to keep you update with all news & activities

This email address is being protected from spambots. You need JavaScript enabled to view it.